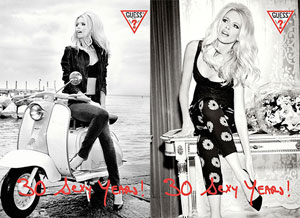 Incredible: Between these two campaign images are over 20 years! To mark the 30th anniversary of Claudia Schiffer posed for Guess again for promotional shots of the fashion label.

Now it is 23 years ago already, as Claudia Schiffer posed for the first campaign of Guess. The campaign helped her big break as a model for that time. Now there’s a new edition of 30 Anniversary of the label. Sorrento in southern Italy, the campaign pictures and the video for the “30 sexy years” were – received collection. This time was like 23 years ago, the photographer Ellen von Unwerth behind the camera.

Guess it can not be assumed for the anniversary, a special collection to bring to market. The campaign shows the current collection, have been reinterpreted in the previous models of the label. As with the current images were Ellen von Unwerth and Paul Marciano, CEO and creative director of Guess in 1989 lead responsibility for the campaign. 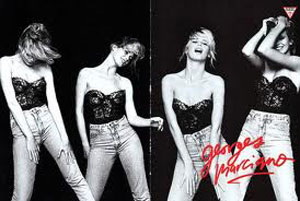 In the past 20 years, Claudia Schiffer and over again while in numerous campaigns by Guess. “Claudia symbolizes everything the Guess woman is,” said Paul Marciano.

“Thanks to its timeless style and their own infectious energy she has for decades been in the forefront of the fashion world here.”

Marciano describes the German top model, as we find, very aptly, as evidenced by the current campaign. Time seems to be almost without a trace now passed the 41-year-old mother of three children. Surely one or the other fold was airbrushed out; nonetheless, the result is impressive. See for yourself in our gallery.