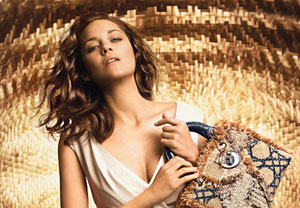 Marion Cotillard and Dior, it’s a story that lasts for three years now.

Having toured the world’s Lady Dior in hand, from Paris to New York, via Los Angeles or Shanghai, the French actress poses for the new campaign for it-bag Dior. A new model that comes in crocodile and raffia, in an ethnic style chic summer.

The shooting of the advertisement, by Peter Lindbergh, unveils Marion Cotillard in a white robe, bathed in light, the Lady Dior pressed against her.