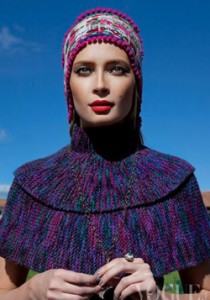 Different, a word that emanates from the designs of Ana Maria Guiulfo, but falls short of defining it. An artist at heart, using their clothes as a canvas creating unique hand painted. Sophisticated and elegant, owner of a modern, casual and versatile full proposals for a custom stamp.

Ana G., as he is known in the field of fashion, presented his first collection inspired by Eastern culture in 2004 and years later would open its first boutique in Miami and then settle in Peru.

Creator of a comfortable style that conforms to most body type, giving freedom of movement, Peruvian designer garments made today’s woman in mind, independent, intelligent, sophisticated, who appreciates life, art, “a woman who need not appear, simply is.”

Ready to present their autumn winter 2012 for the second edition of Lima Fashion Week, that the democratization of fashion in Peru is an important step, but still a “more generous and everyone who is involved in this area look towards the same goal, only then will advance. ”

Meanwhile, Ana Maria continues to point to the future with new projects including an image consulting firm saying that “it is important to know what one looks good, highlighting the best you have, that is, the virtues.” We look in its path.