The first images were revealed in the form of postcards that we came from Saint Tropez making us dream of the French Riviera in these autumn days. They were then takes the Making Of ending with a spectacular campaign and film that conquered all while teaching us the art of seduction, innocence and free spirit in the style of the maison.

Dior creates, draws and reinterprets with this fragrance Dior Addict who made his debut in 2002 thanks to Thierry Wasser nez and today, ten years after his birth again in the hands of Francois Demachy.

Two versions come to light, and Eau Sensuelle Eau Fraiche, both very different from each other, have departed from the original notes of Dior Addict Eau de Parfum, a contemporary oriental rich in nuances. 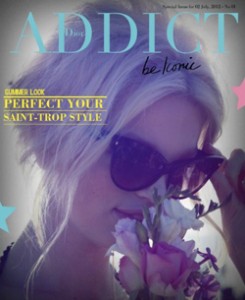 His departure, are mandarin leaf and flower silk tree. It also has a heart very exotic, with notes of a vast tropical flower growing in Jamaica, The Queen of the Night, which opens only once a year and lasts one night. It has a vanilla scent that is mixed with Bourbon Vanilla fund, which always uses Dior in their fragrances.

Eau Fraiche. Your name give hints of what lies ahead. A fresh aroma but sweet at the same time. Grapefruit has a bittersweet departure, which is the note that gives freshness and Bergamot sweet counterpoint. The sweetness of the fragrance is marked by notes of freesia, lotus flower and pomegranate. The fund is a pure white musk excuse to prolong the feeling of freshness and purity.

Eau Sensuelle. Very different from the previous one, this perfume has its strength in combining rose absolute essence and that they will be present from the start and throughout the fragrance. When heart notes reveal, we discover a heart of jasmine light resting on clean white musk, and cedar wood, which gives tenderness.

Also, do not miss the film inspired by the 1956 film “And God Created Woman”. Swedish director Jonas Akerlund has created a short film starring the model it Daphne Groeneveld who plays the iconic French actress Brigitte Bardot.