Once Upon A Time In Sicily

Once Upon A Time In Sicily

An aura of mystery surrounded the first haute couture collection for the Italian brand Dolce & Gabbana, presented in July this year in Sicily.

But it was a proposal either. Conceived six years ago and produced in the strictest secrecy for the past six months, this collection had an elaborate campaign of seduction made to attract the wealthiest women and make it clear that the pair is ready to compete with the rest of maison presenting Haute Couture lines. 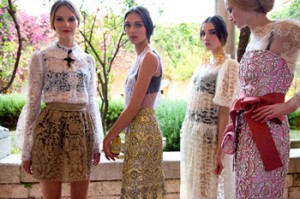 As part of the private show in Sicily, in the old convent, which was accessible only by invitation, the Italian designers showed 73 models of the new couture collection. The models became an aesthetic embodiment of Dolce & Gabbana and the concept of fashion as a separate and independent phenomenon. Sicilian Lace Soft, seductive corsets and fine fabrics, almost transparent, many thoughtful decorations, floral patterns, and most importantly, handmade only, which made the collection was especially beautiful and handmade.