Fope jewelry: for 2012 focuses on web and markets

Fope jewelry: for 2012 focuses on web and markets

In the face of a difficult year for the gold industry, FOPE can be considered satisfied with the results 2011.

The Chief Executive Officer Diego Nardin commented positively the financial review of last year, referring to the 10% growth recorded in sales compared to the numbers 2010 and again putting emphasis on the international vocation Vicenza goldsmith. Foreign markets welcome for 70% of total production FOPE Jewelry, confirming the general trend of the Italian manufacturing sector with a given still higher than the national average. 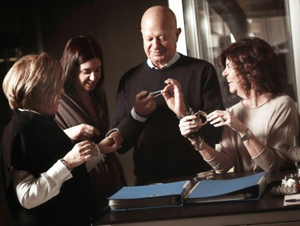 The first few months of this year confirm both the growth and success of both the markets comforting budget targets for 2012.

The commercial results, combined with the efficiency of production processes and the ability to propose innovative and exclusive products have thus confirmed the soundness of the company. In particular, the enthusiasm of the audience rewarded the latest collection Twin. Produced and patented Silverfope, the original alloy of silver and palladium, the line has been enriched by new models with details in gold and colored stones.

The bonus of markets allows FOPE plan in 2012 based on a new marketing campaign: this year the company has in place the modern tools of social marketing – through social networks like Pinterest last generation, as well as Twitter – planning specific actions on new media and web industry.