Impossible not to dwell on the parade Fall / Winter 2013-2014 fashion of Alexander Wang, presenting in just 2 weeks in Paris his first collection for Balenciaga, where Nicolas Ghesquiere he succeeded as artistic director. More photos of the American show below!

The leather trend flagship of the new Alexander Wang collection. The strong piece to remember: the midi skirt black leather.

Look Alexander Wang Fall / Winter 2013-2014. Materials side, there are also a lot of mohair worked to give it a touch hairy, but fur mixed with leather inserts (including coats). 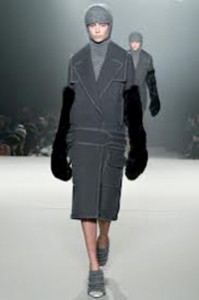 Zoom on this bag Alexander Wang Fall / Winter 2013-2014: new it-bag for after the famous Rocco model?

It also identifies these black shoes very folded cut in the side.

Appointment is made on February 28 in Paris to see the parade by Alexander Wang Balenciaga!

Did you know? Alexander Wang will imagine a handbag for Samsung ArtStart in favor of a New York-based charity. To discover this summer in the designer shops!